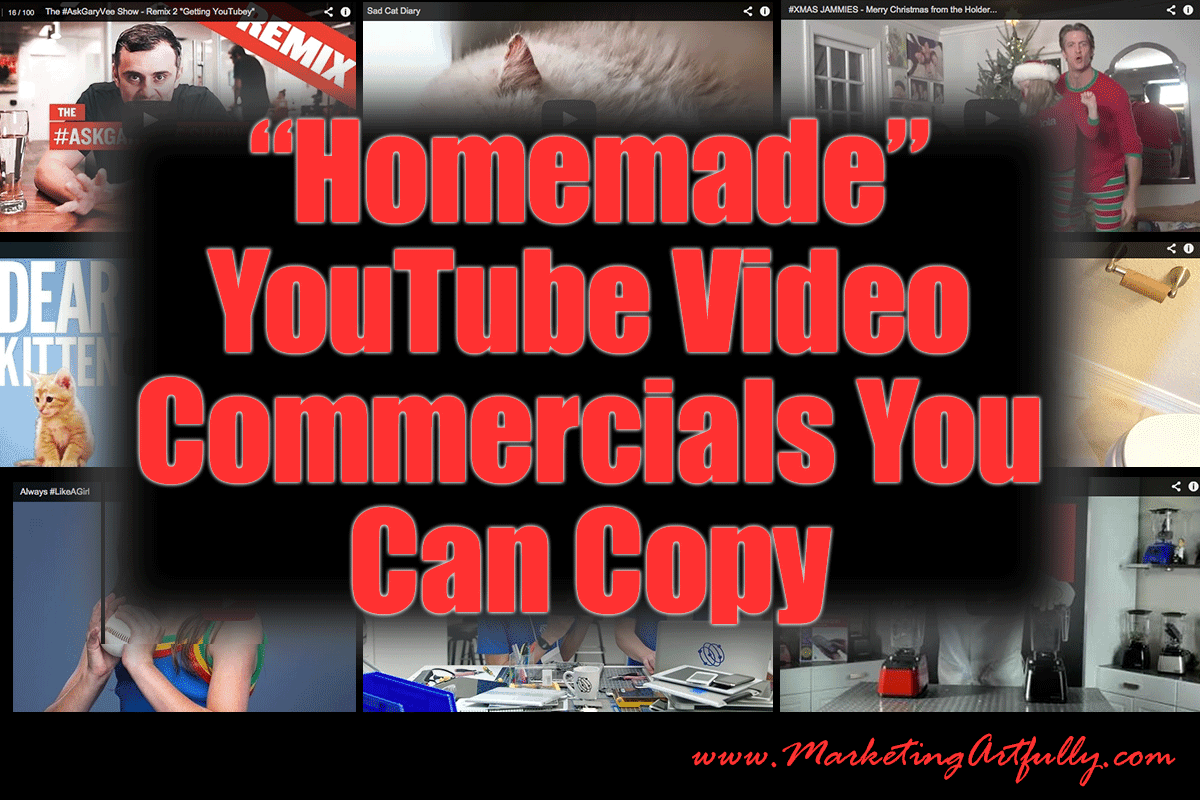 I am thinking of making more YouTube video commercials and you know what that means, I am out there researching what is working now!

Here is one from the “bad old days” of commercials:

These watches were being used to time some of the most amazing sporting events. There were probably athletes that were easily recognizable from that time, and yet we got the talking head guy who told us all about the features of Longines watches. I tell you this only so you don't make a commercial that bores us to death!

How To Make Videos

Today we have an unlimited supply of ways to make video that we can include in our commercials! We can use:

There are bunch of other resources that we can tap and I will include them when I break down each video. It is truly amazing how far video recording has come, how small companies can really start to harness the power of video in their marketing without having to spend thousands of dollars on equipment or production!

So I am going to be really be “messing around” with video to see what I can do with it during this last quarter of the year, BUT I am not the kind of gal that can just have a burst of inspiration and make a fabulous, successful video. I am the kind of gal who has to research other people, how they are doing it and THEN I get creative inspiration that I can copy!

The videos that I am including in this post are all ones that I feel like I can emulate (I am not a professional video gal, but I do have some computer and graphic skills). That said, they are all pretty “normal” with no CGI crazy-ness or big name stars to muddy the waters. In each I will break down my thoughts so that you can see why they were picked with a theme for why I like them.

So for this one we have to go back in time and see that there was man (zefrank1) who had a cool voice, a bunch of videos of cats and a great idea.

Functionally his first 100+ videos were him talking into a camera. They are semi interesting, but not anything that would set the world on fire. He did this for 4 years. Around video 100-ish he made a really funny video about Baby Echidnas that was a mashup of videos and screen captures. It is irreverent and has dirty words in it and I like it very much!

It looks like he did the ones of himself and these funny ones concurrently for a bit until he made the sad cat diary video and I noticed him (I like sad cats!) This one “went viral” and has over 17 million views. I have shared it personally with 1) my husband, 2) my children, 3) my friends and random strangers on social media because it cracks me up!

So now this is a proven winner and Friskies figures out that people 1) like the funny way Frank talks, 2) like kitten diaries and 3) will share the shit out of cat videos. They make a “real” commercial using Frank and his video model. There have been over 16,000,000 views to this commercial!

Now, I have seen Frank's videos from way back and some of them are downright horrendous (the one where he was on painkillers comes to mind), but the thing is he was out there busting his ass, making videos, being vulnerable and checking to see what would stick. Good on you Frank!

That said, any of us could make a video like Frank's cat video just by buying stock pictures, videos or even shooting videos of our cats ourselves. Nothing “big budget” here, just a really creative and fun idea!

This one is cute too, although more blatantly branded and “commercially”.

What is neat about this one is that it is totally “homemade” videos stitched together with words on top. ANY of use could make this one!

Last but not least, Friskies is really good at picking “memes” to copy…you can too!

Two recent videos have shown that utilizing very low budget sets and technology like Skype can be put together to make an interesting video.

This first one is a commercial for Cardstore.com where you can make a card for your Mom after watching this tearjerking video. There is nothing on there that we couldn't do with a screen capture program and a laptop! This one has 21 million views!

I actually adore this commercial by Always. It makes me proud to be a “girl” and that I have strong smart daughters who play like girls. The neat thing about it is there are no cool sets, just a black background and good lighting. If this is something that looks good to you, I am sure you can figure it out!

These two feature “normal” people moving around their homes. They are just cut together videos that anyone could do with their phones!

Now the rap isn't for me, but how targeted a demographic are they reaching?!?! New-ish moms who still want to feel like a person instead of just a blob who had kids!

This was originally a family Christmas card video

This one is funny because of the parody that Macs can't download videos well. I also think that the music adds greatly to the commercial (I have found AudioJungle.com to have the best selection at a great price!) Just doing one like this would be a breeze without any heavy lifting at all!

Okay BIG disclaimer on this one! I have to think that Chromebook bought the rights to use these video clips from movies in their video. You can't just steal video clips and include them in your commercial videos!

That said, there were elements in here that I liked very much including the font, the flashing computers at the beginning and the music. These are super simple to do and for a commercial that I am sure cost millions to make, I feel like I could pull out some parts and do just as good a job!

I often suggest that you make videos of you unboxing new stock or even do demonstration “how tos” that show your product and how to use it. Well a lack of understanding of how popular this could be has forced me to bring out “Bunny”. Bunny has hundreds of millions of views on her videos describing “As Seen On TV” products.

As you can see you don't need to have a big professional set or a polished professional demeanor to be popular! Bunny has grown a following of millions of people who want to hear what she has to say, just by being an interesting personality and being willing to put herself out there!

As you can see, he was much less polished and more, well, geeky back then. There were no whiz bang graphics or snazzy animations when he started, just him, a little intro and a blender. And don't let anyone fool you, it took some time to get views! It looks to be about two years until he had 1,000,000 views on his video!